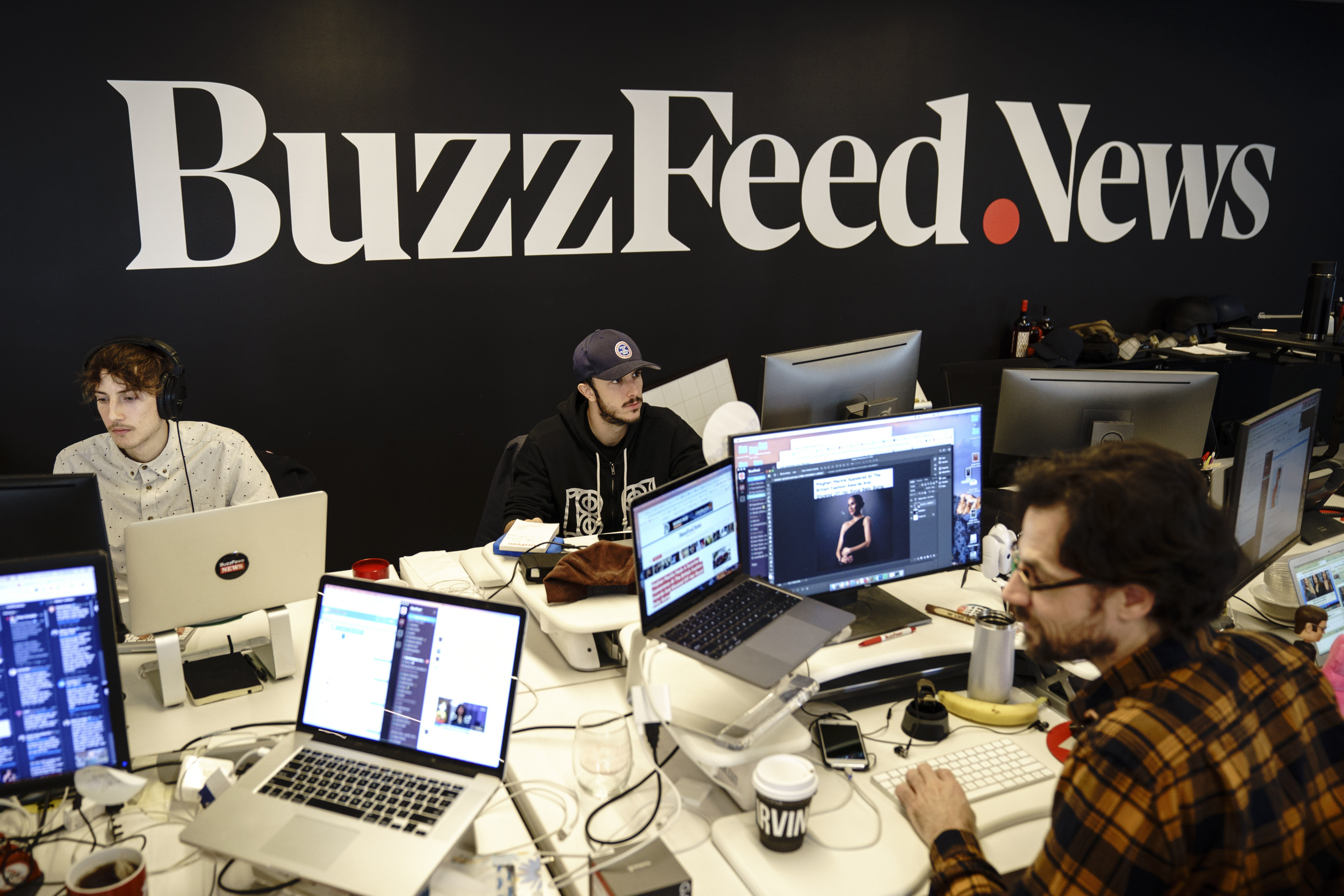 Tuesday was a beautiful day in New York City—60 degrees, cloudless, a perfect March day after a brutal February. At 10 a.m., right when the weather was getting very nice, management at BuzzFeed called a meeting with the staff at HuffPost, which had been acquired by the company in November, a sale that was finally completed last month. The password for that meeting was “spr!ngisH3r3”—surely a good omen, some thought. What kind of monster announces layoffs in a meeting with a password celebrating the return of spring?

But that’s exactly what happened. Forty-seven workers at HuffPost, several of whom had been at the company for a decade, were laid off; staffers were also informed that executive editor Hillary Frey and international editor Louise Roug had opted to leave the company. Somehow, the meeting’s password wasn’t the only screw-up. Staffers were told by BuzzFeed CEO Jonah Peretti that employees who had been laid off would receive an email by 1 p.m. informing them they no longer had a job; anyone who didn’t receive an email could consider their job safe. It is hard to imagine a more stressful way to do workforce reductions, with emails being treated as a kind of reverse golden ticket. BuzzFeed’s management shut down HuffPost Canada altogether before informing its staff.

Mismanaging layoffs has become something of a tradition at BuzzFeed (not that other media companies conduct them with much more competence, let alone grace). Mass layoffs in early 2019 were staggered over several days, a bloody, drawn-out process that likely led BuzzFeed to go for a cleaner kill this time around (though the previous round’s scheduling problems and general sociopathy still resembled those that prevailed on Tuesday). All these culls also point to a larger identity crisis in digital media: It’s not clear what the plan is for BuzzFeed, HuffPost, and the merged behemoth they’re supposed to represent.

Back in November, when the acquisition of HuffPost was first announced, Peretti attempted to explain his thinking to Vox’s Peter Kafka. “A subscription business model leads towards being a paper for a particular group and a particular audience and not for the broadest public,” he said, citing the successful model buoying The New York Times. “Will a subscription newspaper that is read by a subset of society have as big an impact as it could on voters, on the broad public, on young people, on the more diverse rising generation of millennials and Gen Z? I think there’s a huge opportunity to serve those consumers. And not all of them are going to be subscribers to any publication.”

The proliferation of paywalls throughout the industry was an opportunity for an outlet like BuzzFeed that had pledged to keep its product free and open. The New York Times’ success, in this line of thinking, was something of a liability: Its readership would be limited to people who were interested enough in the Times to want to pay for it. BuzzFeed and HuffPost, in contrast, would be for everyone else. Times readers, moreover, were old; these sites could build an audience that had checked out of traditional media.

This was not that different from the argument Peretti had always made about BuzzFeed. The big difference was that it was being made from a position of weakness, rather than strength. Seven years ago, BuzzFeed looked like a swaggering colossus, in part because many believed that it could hoover up an entire generation of consumers who were disinterested in the old ways—they wanted news but also lists and quizzes and color. With that kind of massive reader support, BuzzFeed and HuffPost could also be the national newsrooms of the future, with full-blown newspaper-like operations that could replace the dinosaurs being left behind by the internet.

But that promise—and the implied scale—never quite materialized. BuzzFeed and HuffPost both got bogged down in the Facebook-driven “pivot to video,” which never delivered the audience or dollars that the social media network promised. In the meantime, The New York Times and, to a lesser extent, the Jeff Bezos–funded Washington Post started eating their lunch. The binary between old, print institutions and young, digital ones simply doesn’t exist in the way it did only a few years ago. The Times and the Post became the national newsrooms of the digital era (distinct from, say, The Wall Street Journal, which operates at similar scale but whose business model is geared toward a more specific audience). BuzzFeed’s long-standing goal had been to use an IPO as a springboard into the stratosphere, but those plans were shelved after layoffs in 2019. On Wednesday, Bloomberg reported that the company is in talks to go public via a SPAC, Wall Street’s controversial, bubble-y trend of the moment.

The Times and the Post both have cities in their names, a throwback to the geographic way newspapers used to be oriented, but it’s clear that they are the preeminent national publications of the moment, churning out hundreds of stories on the internet per day. The Trump years were dominated by these outlets, which have since expanded. At the same time, hobbled by a brutal digital advertising landscape, the digital upstarts stumbled. BuzzFeed is now profitable—an achievement in and of itself, given its economic situation not long ago—but not close to the level it projected only recently. HuffPost, meanwhile, lost $20 million last year, a loss so vast that BuzzFeed acquired it in an all-stock deal.

That loss figure meant that layoffs were widely anticipated after the merger was announced. (Verizon, HuffPost’s previous owner, had also telegraphed that whoever bought the company would almost certainly have to make staff reductions.) But the way the cuts were handled was shambolic, suggesting a larger failure to plan for the future. HuffPost had been without an editor in chief for more than a year; it had only been officially a part of BuzzFeed for about three weeks. How anyone could make personnel decisions based on that flawed and limited sample size is unclear. And there is still no sense yet of how BuzzFeed-HuffPost plans to compete with the Times and the Post for a place in the daily media diet of the average reader, who surely doesn’t need more than one or two general-purpose newspapers.

Source: What Is BuzzFeed Doing to HuffPost?

The Year That Broke Care Work