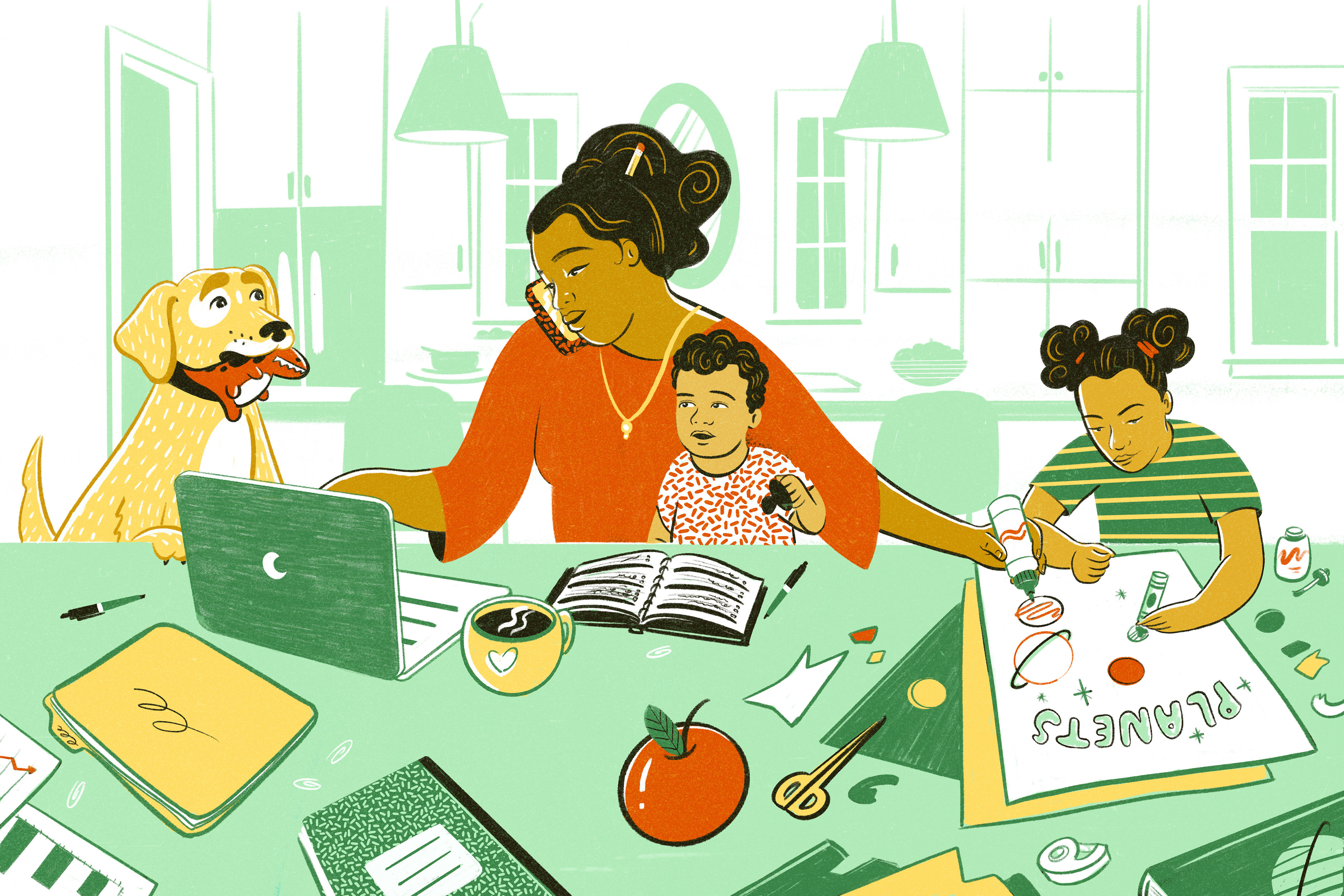 A small guaranteed income is included in the new stimulus package approved by Congress on Wednesday afternoon. Starting around July, households earning $150,000 or less annually will receive monthly payments ranging from $250 to $300 per child, part of the larger $1.9 trillion package in response to the coronavirus pandemic. These are a kind of advance on an existing but expanded child tax credit. What that will look like for those families, however, is a direct deposit or check, not a new program they will then need to apply or ask for. The payment per child may seem small, but in total, the impact is estimated to be a 40 percent reduction of child poverty nationally, cutting child poverty in half for Black families specifically. And it will achieve this by doing something painfully straightforward: just sending people money and letting them spend it on whatever they need.

This expanded child tax credit is meant, in part, to support families facing new pandemic-era household and childcare burdens as a result of school closures and remote work. It is a care crisis and a labor crisis, which has been predominantly a women’s crisis. As of February, “the net number of women who have left the labor force since the start of the pandemic remains at over 2.3 million,” as compared with 1.8 million men, according to the National Women’s Law Center. “Before the pandemic, women’s labor force participation rate had not been this low since 1988.” In January alone, more than one-third of all mothers—10 million total—were out of the workforce, according to the Current Population Survey (sponsored jointly by the U.S. Census Bureau and the U.S. Bureau of Labor Statistics). Globally, the pandemic has led more women than men to pick up the increased household and childcare needs, a United Nations Women survey found, while such unpaid care work has received only a small portion of Covid relief.

This crisis of care is not new for many of these families and these households. The pandemic only brought the care crisis more attention, in part because it didn’t just hurt those already struggling—now the pain had spread to whiter, wealthier families. Something working women had long juggled was now spoken of as the kind of gender inequality that would set women back decades. But it’s not as if things were working so well before Covid-19, either. As Kathi Weeks, professor of gender, sexuality, and feminist studies at Duke University, told me in December, “The Covid crisis has clarified and made more visible some of the existing problems with the wage and family system—as the way that most of us gain access to income is either through work or through our family relations, or the family then distributes some of those wages. And that’s a terrible system.”

Now, with more people struggling in the purported balance of work and home—which is to say, paid and unpaid work—a chance to do something different and better has opened up, too. As Representative Rosa DeLauro, a Democrat from Connecticut, told The New York Times, “The moment has found us.” She has long supported the kind of child tax credit now included in the latest relief package, and she has introduced legislation to make it permanent, something she brought to Congress about a dozen times before, without much success. Overall, the costs will be around $100 billion each year, according to an analysis from the Center on Poverty & Social Policy, School of Social Work and Barnard College at Columbia University; “the social benefits”—largely in improved health and increased earnings, but also through a reduction in criminal justice and child welfare spending—“are over $800 billion.” More plainly put, sending families direct payments means their children will be healthier and earn higher wages and will be less likely to be funneled into either the criminal legal or child welfare systems. This isn’t only relief for people struggling to care for their children now but for a generation to come.

If the pandemic has made this kind of program more possible, expanding congressional support it hadn’t received before, it has also drawn out some predictable opposition. Anti-welfare stalwart Mickey Kaus, who claims that until Bill Clinton came along, the federal Aid to Families With Dependent Children program “seemed to be subsidizing an ‘underclass’ culture in which young women took it as normal when they had an out-of-wedlock child and got on the dole rather than delaying childbirth until they had jobs or got married,” now calls the new coronavirus relief package “Stealthfare!” for its expansion of the child tax credit. A story at Vox seemingly anticipating this kind of response tells readers, “While concerns over ‘welfare queens’ living high on the hog and misspending benefits have often stopped the U.S. from expanding safety net programs, there’s no evidence that child benefits would be used this way.” (The “welfare queen” demonized by the press in the 1970s and 1980s had a far more complex story than the sobriquet suggests.)

What’s wrong with calling it welfare? Decades of cruel, racist rhetoric from Republicans and Democrats alike poisoned what “welfare” means. Groups like the National Welfare Rights Organization, led by women on welfare, were arguing to replace the welfare system with their own “Guaranteed Adequate Income” in the 1970s. As Johnnie Tilmon of NWRO wrote, “I’d start paying women a living wage for doing the work we are already doing—child-raising and house-keeping. And the welfare crisis would be over, just like that.” The child tax credit, as reimagined in the stimulus, is in that spirit. And unlike welfare as it was once known, it does not require recipients to have a job to get it—and that’s a good thing. Still, while it divorces an income guarantee from work, it couples that guarantee to child-rearing, still a conservative way to go, excluding the care work performed by people who are not parenting.

The boundaries between care work inside and outside the home have become even more complex in the pandemic. But what has always been true is that people working in the care economy, largely women, are doing care work both paid and unpaid. Of the mothers NPR spoke to for their story on the child tax credit, they worked in care work outside the home, and/or they wanted to do that work once things stabilize. One said the tax credit would allow her to hire someone to care for her children so she could return to work outside the home.

Though the child tax credit hasn’t got as much notice as other parts of the coronavirus legislation, it did get more attention than a related measure introduced as a congressional resolution last week, the Care for All Agenda, by Democrats Representative Jamaal Bowman from New York and Senator Elizabeth Warren from Massachusetts. As the resolution states, “Care work makes all other work possible,” something care workers, among many others, have long said. The heart of the resolution is that “unpaid caregivers deserve support, care workers deserve quality, high-paying, union jobs, people with disabilities and older adults deserve independence and self-determination, and every person, at every stage of life, deserves to live, work, play, and care with dignity.” The resolution brings together all forms of care work, formal or informal, in the home and outside, and gestures at a kind of solidarity among caregivers and the cared-for—a shared dignity.

Some of the resolution’s supporters have done care work themselves. “When I worked in childcare, I could not afford to send my own children to the center where I worked. We can no longer wait to guarantee basic protections for our families, communities, and workers,” the Democratic representative from Missouri Cori Bush said in a statement. Sharing both their hardships and their fight may also be a new and unique part of this moment. Representative Nikema Williams, a Democrat from Georgia, said at a launch event for the Care for All Agenda earlier in March, “Before I was elected to Congress, I built my power with the domestic workers.”

Williams was nodding to groups like the National Domestic Workers Alliance, which has been pushing for such recognition of the value of care for more than a decade. “It took a pandemic, but everyone sees now, how childcare, paid leave, and home and community care are essential,” said Ai-jen Poo, co-founder and executive director of NDWA, at the launch event. The “moment” has met them, too: 80 grassroots groups worked on Care for All, said Bowman, an agenda that “centers care as the rebirth of our economy.” The reason we don’t, he added, is because of leadership “that centers capitalism, and Wall Street, and the wealthy elite.” This was also a way of acknowledging that the care movement is a workers’ movement, and they share common obstacles.

To center care is not an abstract value, then. It recognizes that care work is work—not a new discovery, even if care work is newly understood as valuable. Brittany Williams, a third-generation homecare worker and SEIU 775 member from Seattle, who later spoke at the launch, said to center care is to do justice by the generations of carers who came before her, those who were enslaved and built the foundation of this country. “It started off with the house slaves—the mammies, they were called, that would take care of the children and the elder master’s family members,” Williams said. “We are carried on the backs of them.”

In her work now, Williams said, “we are the maintainers of life. And sometimes I believe that people forget that—because they are not in that situation yet.” That’s different from saying she and other care workers deserve increased pay and better treatment because the work is essential or heroic. “Why do you think that they have to be heroes to actually sustain themselves in the context of those job conditions?” Kathi Weeks asked, pressing on a similar tension the pandemic brought to the surface, as essential workers were offered more applause than personal protective equipment. Putting care—not just care work, but care—at the center of our economy, our politics, is to orient ourselves around our interdependence. We do this not because someone’s work is what makes them worthy. We do it so we all live and live with dignity.

What Is BuzzFeed Doing to HuffPost?