In one of his last Facebook posts before being shot dead at a protest against the Myanmar coup, poet K Za Win explained his commitment to the nationwide revolt in the same poignant language that characterized his writing.

“Though I have different views than you, I’ll lay down my life for you all,” he said in the Feb. 21 post, uploaded a few minutes before midnight.

Less than two weeks later, on March 3, the 39-year-old poet, activist, and beloved friend of many made good on his promise, shielding younger protesters from harm as security forces fired into the crowd in the central city of Monywa. Junta-controlled state media previously said they were controlling the protests with “minimum force and through the least harmful means.”

A horrific video uploaded to YouTube on March 4—which Amnesty International’s Evidence Lab confirmed was taken in Monywa—shows lifeless bodies splayed on a blood-stained road near the city’s Phaya Ni pagoda. Security forces dragged one away by the hands. K Za Win’s body was found at the morgue the same day, according to multiple accounts provided to VICE World News. The place where he died has been named “Martyrs Street.”

K Za Win was one of at least 60 people killed across the country since the military seized power on Feb. 1. March 3 was particularly bloody, as 38 people died fighting to save Myanmar’s young democracy, using pithy slogans, artistic placards and peaceful rallies against automatic weapons and tear gas. But unbelievably, he wasn’t the only poet who fell. On what has been called the deadliest day since the coup, popular teacher and poet Myint Myint Zin was also killed in Monywa. Like other protesters fearing the worst, she wrote her blood type and personal details on her arm should she need to be identified. In addition to the two deaths, at least nine poets have been arrested, with some reportedly sentenced to time in prison, according to advocacy group PEN International. 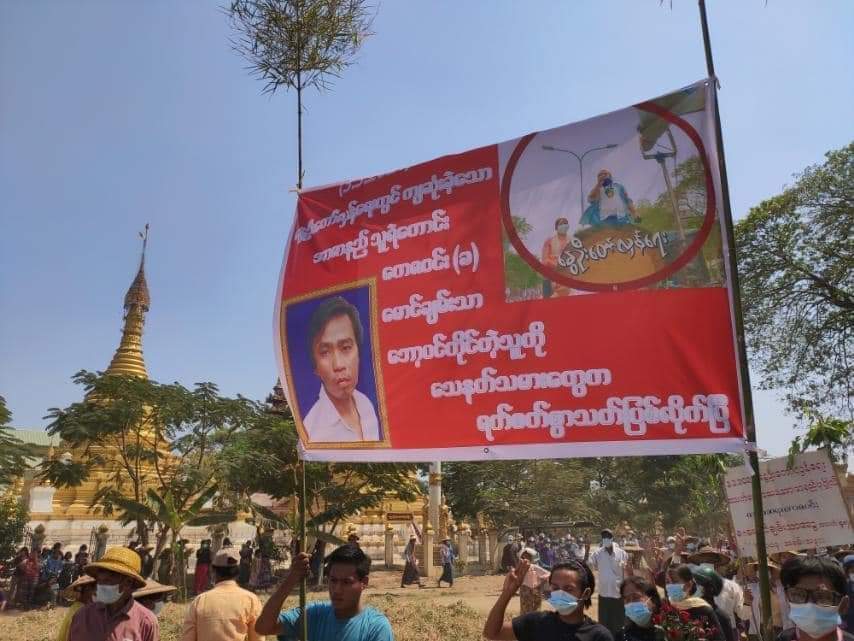 Protesters in Monywa hold a memorial sign for poet K Za Win, who was killed on March 3, 2021. Photo supplied

Friends, relatives and Myanmar’s tight-knit poetry community are reeling from the deaths of their colleagues. But in a country where verses have channelled dissent since the British colonial era, where nearly a dozen poets were elected to parliament in 2015, and where poetry has rarely been about navel-gazing, it comes as no surprise that writers have been on the front lines of the uprising.

“In every revolution in Burma, poetry and poets have been in crucial roles. With the arrival of the smartphone in the hands of everyone, it’s a great help to send poetry to the people,” said an acquaintance of K Za Win’s named Ko Than Tun, who used the country’s previous name. “To be a poet in Burma is more than being just a poet. There are many obstacles and struggles. Burmese poetry can’t escape from the reality of daily lives and settle somewhere.”

Well-known in the country’s poetry circles, 67-year-old Ko Than Tun first met K Za Win after a 2014 farmers protest against a Chinese-owned copper mine operating on their land in Letpadaung, which is near Monywa. At the height of the clashes, a woman in her 50s was killed. K Za Win—whose given name was Chanthar Swe, but like most poets in Myanmar is better known by his pen name—had more than a tangential connection to the area. He was born in Letpadaung in 1982 to a peasant family. His first piece of writing was published in his school magazine when he was 16, PEN International said. His poems started appearing in local magazines in 2004, and he became a member of the Monywa Poet’s Union.

In 2015, he was one of several activists who participated in a storied march for education reform that started in Mandalay and aimed to make it hundreds of miles south to Yangon. Stopped short on the outskirts of the city, the protesters were beaten by police in an incident that made international headlines. K Za Win was jailed for more than a year before being released in a pardon after Aung San Suu Kyi came to power in 2016. Suu Kyi, whose refusal to condemn human rights violations disillusioned former supporters in the country, was herself arrested at the start of the coup and is now facing several charges brought by the junta.

Ko Than Tun became close friends with K Za Win after his release from jail in 2016; he respected the way he used his art in the service of his beliefs.

“Among the handful of poets who write poems for a cause, I accepted him for his poems and his political ideas,” Ko Than Tun said.

While in prison, K Za Win wrote a long verse addressed to his father, which touched on the duties of a son, the abuses of the state, and the tensions between them:

the River, whose stomach

on our tiny house on the bank, hasn’t she?

Right in front of the house

you must be looking out for someone

who will help you with

to straighten the river,

to fill her holes with

The poem moves from the picture of life at home to much wider themes about authoritarian power structures, corruption and inequality.

armed to the teeth.

If thieves are ungovernable,

if thugs are ungovernable,

what’s the point of government?

Whatever happens to the jungles

whatever happens to the mountains

whatever happens to the rivers

They love the country

just the way they love to grate a coconut,

The night before the military takeover, on Jan. 31, K Za Win slept at the home of his good friend Kyi Zaw Aye, one of Myanmar’s most important poets who met him while working on a literary magazine together. They learned about the coup with the rest of the country the next morning, on Feb. 1. Though information was trickling out slowly because of an internet blackout, K Za Win immediately sensed the importance of what was happening.

“He told me a battle is coming, we’ll have to go to it,” he said. They both took to the streets.

Soon after, Monywa, where K Za Win worked as a teacher, became the site of some of the most turbulent protests against the regime. 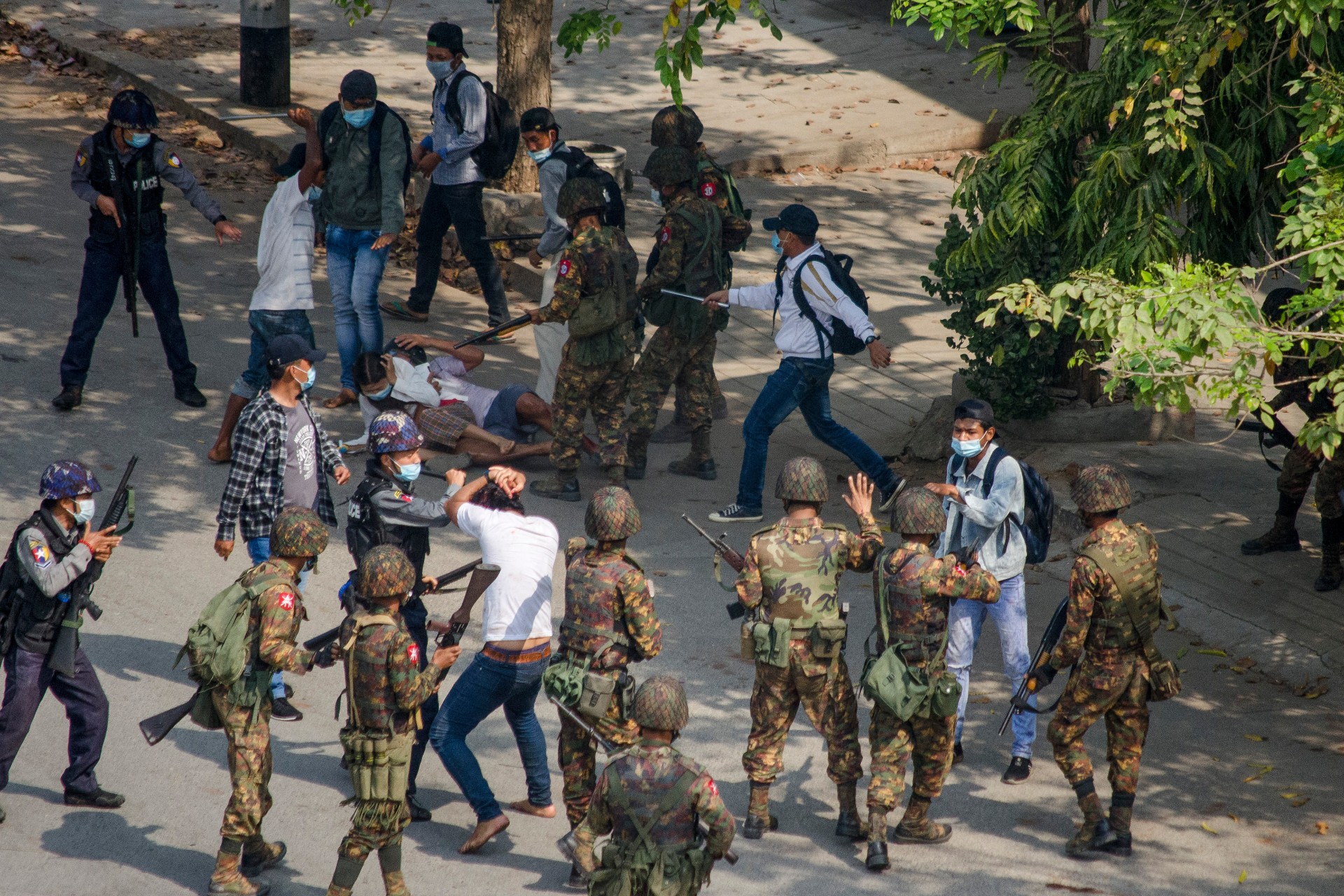 Protesters are tackled by the security forces as they crack down on demonstrations against the military coup in Monywa on Feb. 27, 2021. STR / AFP

Throughout the month of February, his Facebook page was filled with posts about the events, including pictures, short thoughts and statements. On Feb. 23, he uploaded one of his last published poems titled “About the Skulls.” Parts of it are a call to action but also a shot across the bow at meaningless international expressions of concern:

Before the revolution blooms,

from the busted skull on the road,

are there any words for us?

When confronted with devils,

He ended by encouraging everyone to take part in the peaceful demonstrations and not sit on the sidelines.

the detonator of the revolution is

just you or me.

The day before his death, on March 2, K Za Win again stressed the importance of the protests in a short post:

Don’t utter a word that will undermine this job.

Don’t think a thought that will undermine this job.

The job at hand is not just for one party or one organization.

This job has to do with the future of the entire human race.

Crowds gathered in different groups on March 3 in Monywa, as state-backed forces assembled to confront the protesters. K Za Win was with book designer and publisher Lwin Htet Hlaing, 44, who he has been friends with since 2013, when the younger poet worked for him in Yangon. They later both moved back to Monywa and stayed close. Asked to reflect on what motivated his friend, he said K Za Win was guided by an outlook that seemed to transcend partisanship and groupthink. He added that he did not vote for Suu Kyi’s party, the National League for Democracy, in elections last year. When the coup happened, they joined the demonstrations not out of loyalty to politicians but because it was wrong.

“We took part in the revolution not for a single party, but we stood up for justice,” Lwin Htet Hlaing said.

On that fateful March 3, K Za Win was at the front of a large rally as tensions mounted with security forces, who had not used lethal force on the demonstrations there yet. When Lwin Htet Hlaing came next to him, K Za Win turned, grabbed him by the hand, and told him to go back to where it was safer.

“He told me ‘bro, you don’t have any gas mask, go back.’” Lwin Htet Hlaing retreated. As he went away, he saw K Za Win picking up a tear gas canister and tossing it away. Another close friend named Khet Thi said K Za Win stayed behind to help students when others ran in terror during the crackdown. He believes K Za Win was shot in the back by security forces, though the claim could not be independently verified.

After the protest, friends regrouped. But they could not reach K Za Win. He wasn't answering his phone the next morning. They went to the hospital to try and find his body but authorities would only let family members in. Eventually, someone staying in his house showed up and positively identified him. Their worst fears were confirmed. Khet Thi said his friend was faithful to his words.

“It’s just like he posted on his Facebook page: 'Though I have different views than you, I’ll lay down my life for you all,'” he said.

“If necessary, we too have decided to do the same as him.”

*Additional biographical information and translation from Burmese to English was contributed by poet and translator Ko Ko Thett.

Source: Poets Are Among the ‘Martyrs’ in Myanmar Coup Protests

First He Held A Superspreader Event. Then He Recommended Fake Cures