There are signs that domestic leisure is starting to spark, particularly around major South African cities, after a dreadful year with self-inflicted wounds such as a ban on alcohol and beach visits that have been heavily criticised.

There are also signs that millions of people fed up with Covid restrictions are ready and primed to travel. The Travel Technology Association says after a year of quarantine, 82% of families surveyed have plans to travel in 2021, and the travel industry is adapting to prioritise safety as the world emerges into a post-Covid environment.

Tourism-dependent regions such as Cape Town have been gutted by the Covid lockdowns, a situation made worse by the beach and alcohol bans (now lifted), as well as the shutdown on international travel. SA received slightly less than 200 000 foreign arrivals in December 2020, compared with nearly 1 million over the 2019 December period – a drop of about 80%.

Hotel cancellations increased dramatically after the lockdown announced in January, along with the beach and alcohol bans.

Across the country, January 2021 occupancies averaged 20% compared with 57% in January 2020. Most hotels require occupancy levels of 40% or more to turn a profit.

“Businesses with strong balance sheets rode out 2020, but are now running out of cash,” says Saunders.

However, there are shards of light appearing through the gloom.

“There are encouraging signs that domestic leisure tourism is picking up, though the evidence is tentative and anecdotal at this stage,” adds Saunders.

“What we are seeing is a huge pent-up demand for travel, both in the domestic and international markets. Once the vaccine roll-out accelerates and we see borders opening up again later this year, we could see growth in tourism after a terrible year for tourism worldwide.”

Lee-Anne Bac, director in advisory services at BDO, told Moneyweb that the lockdown forced hotels and tourism providers to adapt to customers’ changing requirements by stepping up sanitary and social distancing practices.

“I think the rise of domestic leisure tourism in SA is going to be a permanent feature of our sector,” says Bac.

“People who would normally travel abroad but couldn’t because of the shutdown on international travel have become domestic tourists. This is particularly evident among middle class South Africans who are eager to get out of their homes after being cooped up for months on end.”

A survey by the International Finance Corporation details the havoc wrought by the lockdowns: by October 2020, 28% of tourism businesses had closed, and 5% of these had closed permanently.

Some 92% of tourism businesses reported a 50% or more drop in revenues; 58% were unable to service their debts and 61% were unable to cover their fixed costs. More than three-quarters had furloughed staff, and 11% had made more than 50% of their staff redundant.

Plettenberg Bay Tourism estimates that R674 million was lost between October and December due to the shutdown of beaches, the curfews and the alcohol ban.

A final straw for many foreign tourists was the alcohol ban – people don’t want to holiday without alcohol, says Saunders.

Hospitality businesses in Eastern Cape and along the Garden Route lost most of their usual seasonal trade over the peak October-December period, with KwaZulu-Natal and the Western Cape losing the latter part of the season.

Saunders says the upcoming Easter break could turn out to be something approaching a normal leisure season, provided there is no reprise of the beach and alcohol bans or night-time curfews.

“It will take another year or two before world tourism recovers, but I think when it does, it could be huge. People want to travel, and advance bookings are steadily climbing. Unfortunately, international bookings to SA may take a bit longer to recover given the perceived risks of visiting a country seen to have a particularly lethal strain of the virus, though the stats show that our second infection wave did not spread more rapidly than the first. There is no doubt that the tourism sector will bounce back, hopefully starting later this year.”

A 2019 World Travel and Tourism study entitled Crisis Readiness analysed how rapidly tourism recovers from different types of crises. None of the crises analysed had the same level of impact globally as Covid, though there were devastating impacts on specific regions and countries from events such as terrorism and natural disasters.

Where tourism was hit by terrorism, the recovery time was 11.5 months on average.

Civil unrest and political instability cases had the highest average recovery time at an average 22.2 months with a range of 10 to 45 months. Natural disaster recoveries took 16.2 months on average.

The recovery time from disease cases took 19.4 months on average, with a range in recovery from 10 months to 34.9 months.

If this is any indicator of what is in the near future, the world’s tourism sector could start to recover by the final quarter of 2021, accelerating into 2022, but with normal levels returning only in late 2023/2024.

Bac says tourism businesses have shown remarkable resilience in repurposing their operations to cater to a more local market, and in finding new ways to reach out to new markets.

“There are a lot of things guest houses and hotels can do to attract new customers. For example, offering meals in rooms rather than in a common dining area, providing spaces to safely work and stay, and by promoting their health and safety protocols. Many are already doing this.”

There are still major hurdles to overcome to see any return to normal for the tourist sector.

The British Lions tour scheduled for July may be cancelled, postponed or hosted with few or no spectators, according to a presentation by Tourism Business Council of SA (TBCSA). Fans from the UK and Ireland have already started cancelling bookings for a sporting fixture that was expected to attract 27 000 visitors and R1.1 billion in revenue.

The TBCSA recommends more radical action from government to rescue tourism businesses, including extending its Loan Guarantee Scheme to the travel and tourism sector, and vaccinating tourism frontline staff as a priority.

What also needs to be tackled is the narrative of SA’s dangerous Covid-19 variant, particularly as the stats don’t support this exaggerated claim.

Lockdowns needs to be less ‘stop and start’ should a third wave of the virus hit during the winter season, and government needs to provide better advance warning of any future lockdowns.

Capital Economics reports that tourism sectors in Africa will be among the slowest to recover from the coronavirus crisis, inflicting further economic pain in economies most dependent on the industry.

Hotel searches and bookings offer a gauge of demand for tourism and on both of these metrics, all other regions apart from Europe outperform Africa. African destinations seem unlikely to be the first port of call for many travellers when pent-up demand is released. 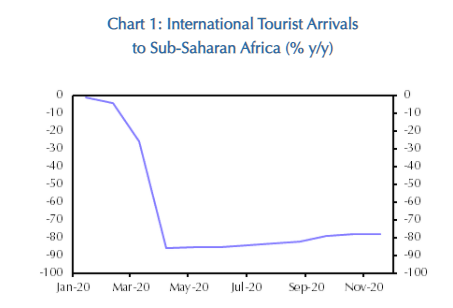 Warmer Arctic waters could turn the tides in LNG markets